At just 19, Christo Geoghegan has already established a portfolio to be proud of. He has been featured in several galleries, on the cover of Barcelona Metropolitan, and the film Reclaiming the Blade. Raised in Singapore, London, and South America, his work focuses on interpersonal relationships in modern culture; lingering emotions in a fast-paced environment. He has also documented a selection of live shows, often capturing the electricity of bands such as Crystal Castles and Midnight Juggernauts (below) on the brink of breakthrough success. 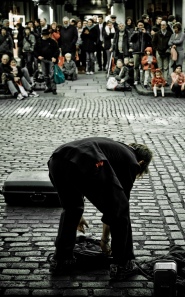 Christo is based in London, and is spending the year honing his skills in Tokyo and at the University of Leeds.